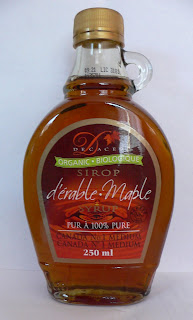 On March 25, 2010 the federation of Quebec Maple Syrup Producers released a report on 2 independent scientific discoveries which show that Canadian maple syrup can be good for you. The examined the nutritional value of the syrup and noted antioxidant properties, as well as the discovery of substantial quantities of abscisic acid. Abscicis acid is a phytohormone known to stimulate insulin release through pancreatic cells and increase sensitivity of fat cells to insulin, which makes it a potent weapon against metablolic syndrome and diabetes.

Here is a link to an old blog that has a delicious recipe for Maple Scallops.